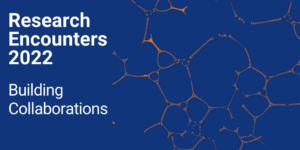 Our recent Research Encounter offered a rare opportunity to hear from three leading figures reflecting on their experience of collaboration and boundary pushing. They were:

We kicked off the conversation by asking our panel how they started collaborations and sought out the people they wanted to work with.

Helen Clark said that her time in academia in the 1970s was definitely not about teamwork, much more of a lonely, scholarly pursuit. Working with diverse teams only became the usual way to operate when she entered her political career and then worked at the UN. “The structure of the organisation can define the collaborations but, of course, you need to reach outside it to test ideas, get independent advice. I always like to hear independent advice, not just through official advice streams.”

Prof Kupe had a different experience. He went to university in Zimbabwe in 1980s, post-independence, where his University wanted to reach out, become less isolated, creating opportunities to allow people to study abroad. Prof Kupe did his PhD in Norway and has had what he describes as, “a career forged within collaborations and partnerships.” He added “as Vice-Chancellor, I now drive the University of Pretoria through collaborations and partnerships.”

As Mohit Bakaya pointed out, the BBC does not need to approach others when externally engaging because, simply put, people come to them. “One of the things we must do when choosing to collaborate is to not go for the usual suspects. It’s the same as when you’re recruiting people for jobs, you’ve got to avoid cultural cloning. It’s very easy to work with people who look like you talk like you, are of a facsimile of yourself. Actually, those are often the least useful collaborations. The really important collaborations are the ones where someone really brings a very different set of skills, experiences and expertise to the table.”

Our speakers advised people engaged in research to be outward facing and easy to connect with. The University of Pretoria (UP) approaches this by partnering with The Conversation Africa, an organisation that seeks to translate academic knowledge to the public, on a free platform where the media can pick it up. Academics at UP are required to train with The Conversation to be able to translate their complex ideas into information and knowledge, that is publicly available. They are trying to change the paradigm by asking the big questions: What are the mutual interests? Where do we have strengths? Where do we have opportunities to build capacity? Prof Kupe suggested a research collaboration needs four drivers: developing new academic programs; developing capacity; creating interesting research projects in partnership; producing policy relevant, interesting, critical analytical research.

The BBC, like everyone else, shares the same of issue operating in a very fast changing societal landscape, where the technology can seem overwhelming. Mohit Bakaya sees Radio 4 as filled by ‘other people’s knowledge and expertise. It’s our currency.’ For this to work and represent modern Britain, they need to work with as wide a range of people as possible. They have contributors and are constantly looking for academics to be their experts. The challenge can be to make it mutually useful. Mohit talked about this project with the Wellcome Trust arising from conversation at a party where Mohit asked how the researchers planned to reach a wider audience. This turned into a really fruitful collaboration which gave the BBC a series of programmes on unusual topics including rest, touch and loneliness. The win for the Wellcome Trust was a sample group of Radio 4 listeners, with 55,000 people filling in their research questionnaires.

As with all research collaborations, there needs to be an understanding that academics are not a ‘cheap R&D option.’ Helen wanted to expand this thinking beyond the usual university/industry approaches. ‘The emphasis on what is it that universities do and contribute to, in particular economic growth, tends in my opinion, to lead to a devaluing of the Humanities. For example, and I think we’re a much poorer society if we devalue the study of Humanities and Arts. I think universities have to be about more than how we design public policy. They also have to be about, the fulfilment of individual potential, they have to be about enlightenment, they have to be about the exchange of ideas.’

So do we always have to think of ourselves as commercially oriented or business attracting in our research? Tawana thinks not. “No, because I think that if it’s just narrowly conceptualised in that instrument, I doubt that that knowledge would even be worth with it. The best of knowledge thrives in an intellectual environment. The enlightenment dimension is also connected to having democratic societies that cannot be just subjected to the printing of the cash register for the paycheck today, democracy requires more robust discussion and debate. You discuss with more people so it is not just a of a cacophony of opposing voices that polarise, but ones that seek to produce some degree of understanding about what it means to be human, and what it means to actually relate to other human beings. That is the basis of the kinds of human rights that we actually enjoy and those cannot simply be commercially determined.”

Our speakers were sharing their insights from positions of influence, and one questioner asked how Fellows can engage with these types of organisation when they are starting out?

Helen Clark had some sound advice. “If at first you don’t succeed, try, try and try again because you can run into brick walls, right? People would write to me all the time, ideas, suggestions, and from time to time, if it looked to me like it had merit, I would meet people myself and then bring in the officials then I’d suggest they went away and worked on that, and see what we they could develop. So don’t dismiss the idea of trying to go as high as you can because that will force a kind of discussion and debate in an organisation. If you’re really convinced that what you’ve got is important, then policy makers and the media need to know about it. Just keep at it, you’ll find a way in one way or the other.”

And finally, Mohit, gave some clear advice to participants. “Really think about what kind of questions and what kind of research you can bring. What feels like it’s breaking new ground, then find a production company. It’s not too difficult to work up an idea with them. We commission thousands of programs a year, so there’s real scope, and those programs often come from people who know about something that they think needs wider examination/exploration.”

Ideas on how to collaborate:

This blog reports only a small part of what our brilliant speakers conveyed. For a greater understanding, please look out for the recording. Mohit Bakaya emphasised the need to engage with media for mutual benefit and we will be running a session on this on 21 March with Prof Barry Smith. And finally, Prof Kupe spoke a lot about equitable partnerships which deserves its own blog, so that we are working on that with him and it will follow soon.